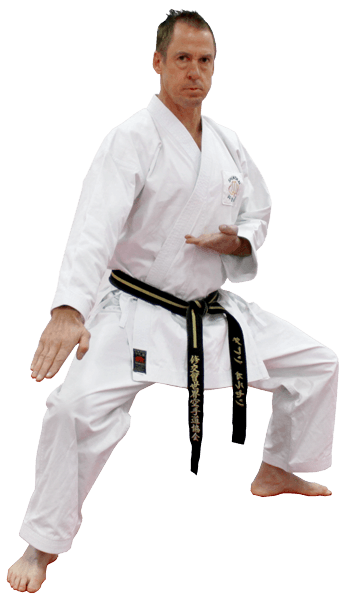 In 1979 I started training in a hired hall at Skinners park reserve in Braybrook Sunshine with Ian Eddy. The hall leaked, the floor was often dirty from parties, and the wind used to cut through there in the winter time. In 1985 I took over as Instructor for Ian went to Port Douglas. I met Sensei Paul Mitchell as part of ASKA in 1980, started training with Sensei Paul, in preparation for black belt in 1981 at the Bayswater Dojo.

While I was an orange belt I can remember sensei Tommy Morris coming out, it was at that time that Shukokai was put up on its end. We were doing Shukokai that was 20 years old. It wasn’t up with the times and Sensei Tommy started our change. It was ok to me as an orange belt, but I can remember that many of the seniors, both in Sensei Alan, Sensei Paul’s and in Sensei Ian Eddy’s dojo, left at that time because they could not handle the change. And they did not wait to see where the change took us, so they did not benefit from it.

Since I have trained with:

Most important the people I trained with like Sensei Ronan etc

Ive been teaching in my own club since 1985. Started a full time club, in Sunshine in 1987, teaching continuously until today. I have had the great experience of teaching in Japan at 2 dojo’s, one being Sensei Tani’s Honbu Dojo. I have also been a state Kumite coach with the AKF since 2005.

Winner of overall Student of the  year twice, and Stylist once

My Passion for Karate stems from a journey in self realisation through self development, of the big 3 Mental, physical, and spiritual growth.

From that I feel my mission in life is to provide a service to improve all aspects of the human experience for my students, teaching life skills for their own self realization.

To have a positive effect on the lives of as many people in the community as is possible, utilising the Martial art of Karate as the foundation for their own personal development and journey.